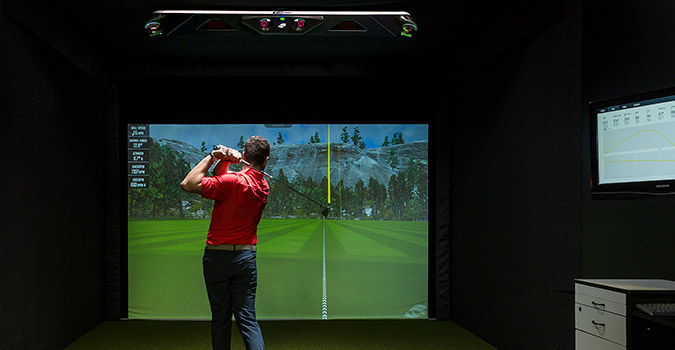 Golf & Ski is excited to offer golfers of all ages and abilities the very best in custom club fitting technology.

Each store is outfitted with state-of-the-art Foresight Sports GCHawk launch monitors to evaluate your swing characteristics and launch conditions before and after impact.

Fitting sessions in our GCHawk fitting simulators are offered free of charge on a first come, first served basis.

Nick played college golf at Franklin Pierce and has been sharing his expertise at Golf & Ski for over 15 years, the last 10 as the West Lebanon store manager.

“I was excited to have Nick fit me,” Chris says, “and he proved to be outstanding in the process.”

Here is Chris’s first person account of how the GCHawk system works. Check it out and then come try it for yourself—it’s available on a first-come, first served basis.

The first thing I noticed when I stepped into the new GCHawk fitting bay in West Lebanon was the absence of any measuring device or technology behind me at floor level.

This state-of-the-art object-sensing and image-capturing technology takes your swing and ball flight data and projects it onto the large floor-to-ceiling image of a driving range where you strike your balls.

Right after you swing, you can watch your ball flight, and then see the ball land, roll and stop—from your perspective standing behind the ball.

After the ball stops, the GCHawk perspective of the range switches to an overhead view and replays your shot from above. It’s really helpful (and really cool!) to see your ball flight from this viewpoint.

You can see your ball going left…right…fading…drawing—and see exactly how wide of the target you wound up—or how close.

Numbers appear on the big screen, showing how far your shot carried and its total yardage when it stopped rolling.

The GCHawk system captures and displays multiple data points across the top of the screen in front of you—from ball speed to carry, height to distance, spin rate to descent angle, and more.

You can review them with your fitter, who also has access to a computer monitor at the fitter’s workstation, where he or she can organize and review the data with you in real time or after your session to provide a clear, detailed summary.

The second aspect of the GCHawk system that I found unique was my ability to hit balls from a wide portion of the thick green hitting mat, as opposed to hitting from one specific spot over and over.

I could drop the ball and roll it to a favored position, and then take my stance and swing—just like I was on an actual outdoor range.

GCHawk promotes this ‘true-to-life’ element of their system, and I really liked it.

I wasn’t confined to the very same position every time I swung.

I was, however, able to use the very same ball I play on the course because Nick had a drawer full of options for me to choose from, including my favorite ball, the Bridgestone Tour B XS.Hitting the ball you always play gives you confidence that the results you see using the GCHawk reflect your normal game.

Again, this ‘true-to-life’ aspect of the system was excellent.

Nick had me start by hitting several shots with one of my current clubs, a four-year old Callaway Apex forged 7-iron. These have been great clubs for me, but being forged and softer, the faces and grooves are now worn.

It’s time for a fresh, new set of clubs.

Have you thought about switching to a graphite shaft? It will lighten the weight of the club, lessen the vibration, and be easier on your joints.

As I hit my 7-iron, a blue line traced each shot down the range on the big screen in front of me and then I was given the overhead perspective in an instant replay.

I hit four good shots and one wildly errant pull to the left.

“It happens in July, too,” I said, shaking my head.

Nick pointed to the four blue dots on the screen, where my better shots had finished, and ignored my one mishit.

“Overall, you have good dispersion,” he said. “That’s good to see.”

He then asked me about my current clubs—if I had any special specs and whether I liked the club head size.

“Golf is very mental,” he said, “so it’s really important to like the way your club head looks at address.”

I said I liked the look of my Apex irons and shared my club specs with him. I also explained I was going through a swing change and standing more upright to help take pressure off the left side of my back and my left shoulder.

“Just feeling my age,” I said with a smile.  “Not quite as strong and a bit more achy.”

Nick said, “Have you thought about switching to a graphite shaft? It will lighten the weight of the club, lessen the vibration, and be easier on your joints.”

“I haven’t really thought about graphite, “ I said.

“From a pure performance standpoint, you’ll hit it longer, get the ball higher and feel a lot better coming in over the last four or five holes of every round.”

He then assembled a Ping i500 iron for me—Ping’s only forged iron—and handed it over.

“This is a hollow bodied iron. The cavity is on the inside, so it has a traditional look, but provides the benefit of a cavity back.”

I took my stance and struck the best shot I’d hit so far, as a yellow tracer tracked my ball flight higher and longer than any ball yet.

I set up and hit another shot, and the same thing happened. A higher trajectory and a longer carry, along with the soft, solid feeling I love with forged clubs.

“It’s a proprietary Ping shaft. They co-engineer it with an outside source. It’s pretty exceptional.”

Nick stepped up to the big screen. “Let’s compare the data.”

The GCHawk made it very easy for me to see the different results as Nick pointed them out.

Using the overhead perspective, he said, “You hit the Ping higher and carried it farther than all the other clubs. You averaged seven yards more carry than your current Apex iron.”

“You also had a better descent angle than with any other club. So you hit it higher, longer and stopped the ball quicker—everything you want with an iron.”

The GCHawk had compiled all the numbers right there in front of us—and combined that with visual evidence. A very effective one-two punch that left no doubt about the difference between clubs and their results.

What About My Specs?

“What about the lie angle?” I asked, wondering if Nick had followed my current club specs. “Did you set this up two-degrees flat?”

Nick shook his head. “No, I didn’t—because you said you’re standing up straighter with your new swing. But let’s check it.”

He put a strip of tape down the sole of the Ping i500 and had me hit two shots off a hard plastic plate—to determine the impact point.

Each time, the sole of my club made contact in the ideal place.

He laughed. “I have my moments.”

Time To Fit A Driver

Now I wanted to experience a driver fitting with the GCHawk system.

Again, Nick had me start by hitting my own club—an original Callaway Epic driver with 10.5 degrees loft and a slight draw bias—to establish a basis for the fitting.

I placed the cone on the mat and teed up my ball, just like I was on the course.

Again, I liked how the GCHawk system replicated playing real golf. When I hit my drive, the cone shaped tee flew forward, just like on the course. I had to walk and fetch it.

“These tees are great because they keep people from taking one swing after another in rapid succession,” said Nick. “You have to stop, collect your tee, walk back, set it up again. It forces you to take your time between drives. And that helps you reset, take your proper stance, and hit better drives.”

I mean, I shoveled the driveway all winter. Didn’t that count for something?

Unfortunately, the GCHawk showed the drives with my original Epic going low and slightly to the right—not very good drives and not my usual pattern.

Was I turning properly? Swinging through the ball?

A Variety of Drivers

Next, Nick handed me the new Callaway Epic Flash to try, and I concentrated on making a fuller turn. The GCHawk showed very consistent distance and a low variance between shots.

Nick pointed out my data points were better.

But not yet great.

Now, Nick set me up with the new TaylorMade M5 with Twist Face technology, but unfortunately this didn’t work very well for me. The GCHawk tracer revealed a lower trajectory than any drives so far.

So I wouldn’t turn into Rory McIlroy after all. Maybe next year.

With my confidence shaken, I accepted the next driver from Nick wondering why I was such a weakling. I mean, I shoveled the driveway all winter. Didn’t that count for something?

The new club was the Ping G410 driver, and I hit it so well on my first try that I burst out laughing. Relieved. Surprised. Impressed.

The ball flew higher, straighter and longer—by a good margin—than any drive yet.

“That tells me two things,” said Nick, smiling at my delight. “The Ping proprietary graphite shaft really works for you and you need more loft. The G410 comes with 11 degrees of loft. And I adjusted it up to 13.”

So 13 wasn’t an unlucky number after all!

I hit three more very good drives with the G410, and then Nick handed me the new Cobra King F9 Speedback driver.

“Wow,” I said, waggling my newest weapon, “this is light.”

I set up my ball on the plastic cone, took my stance and swung. The GCHawk showed a high flight pattern, drifting slightly to right, but with good distance—very close to the Ping G410.

I hit three more drives with the Cobra, all of them with the same flight pattern and good distance.

A Different Color for Each Driver

Just like with the irons, each driver result with the GCHawk system featured its own color, so it was easy to compare the clubs.

Nick waved me over to look at the computer screen at his fitting station. He organized the data and scrolled through it.

“Take a look at this,” he said. “The height and launch angle of the Cobra drives are very good.” He kept scrolling. “But here’s the Ping, and overall, the numbers are better for you.” 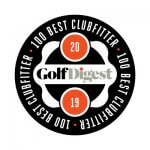 The last thing Nick did was to adjust my current Epic driver to a higher loft and have me hit it again. I was amazed to see it fly as high and almost as far as the best of my G410 drives.

I’m all in for the new Ping i500 irons. But I’m waiting for my birthday in June to see if I can coerce my family into the giving me the Ping G410 driver. In the meantime, Nick’s got my old Epic tuned up perfectly, which is the sign of a truly exceptional fitter, one who knows how to maximize the powerful, ‘true-to-life’ GCHawk fitting technology.

No wonder Golf & Ski has been named a GOLF DIGEST Top 100 Clubfitter. With experts like Nick and the best fitting technology available, all of us can maximize our performance and our fun.