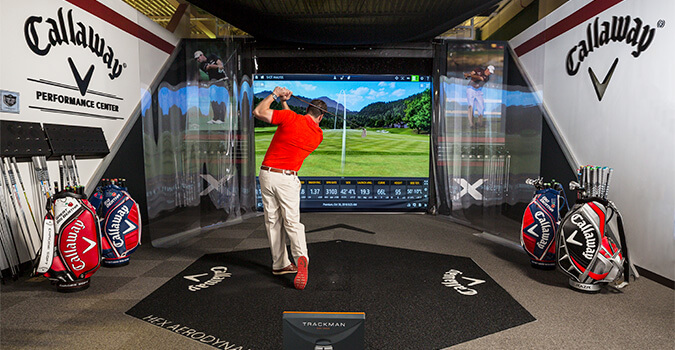 When I heard that the Callaway Performance Center (CPC) in Hudson, NH, was being updated with a new TrackMan 4 Golf Simulator, I jumped at the chance to try it.

After all, TrackMan is widely acknowledged as golf’s leading technology for club fitting and game improvement. 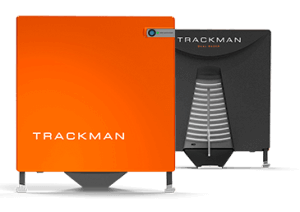 TrackMan is featured on the television coverage of professional golf tournaments, its colored tracers following the flight of the ball and providing data on carry and curve.

So having the chance to experience this very same technology had me very excited to enter the CPC on a brisk November afternoon for what turned out to be an eye opening 90-minute custom fitting.

I’d been through a CPC custom fitting several years before, and enjoyed excellent results when my handicap dropped by three strokes using my newly fitted clubs.

I wondered what gains I could make this time around as I shook the hand of Mark Harrington, a CPC custom fitter who proved to be an expert at the controls of the TrackMan 4 simulator.

TrackMan 4 captured every flight of the ball, along with 10 data points

Mark started by asking me what clubs I play, how often I play, what my handicap is, and what my goals were for the fitting.

Did I want a more forgiving iron? Was I interested in forged clubs? Did I have a look and feel in mind? Was I after more distance? Or was it more about ball flight and accuracy?

“Fitting your irons,” he said, “we’re going to see your ball flight, your shot shapes, how close you are to the target. You’ll be able to see what you like and what works best.”

Mark started by having me hit my current 7-iron—a three-year old Callaway Apex forged club with a KBS Tour-V 100 R shaft, two degrees down and a half-inch long—from the synthetic tee area.

The large screen in front of me showed a spacious driving range located in a high desert, the perfect antidote to New Hampshire in November, with a sunny sky and mountains in the distance.

I had a question about my lie angle. I thought it needed to come up a degree or two, but Mark put some tape on the sole of my 7-iron and had me hit off a hard plastic mat to determine where I was making impact—and the result surprised me.

“It looks like you could actually use another degree down,” he said. “I’d suggest you move to 3 degrees down.”

As I struck my shots, the TrackMan 4 captured every flight of the ball, along with 10 data points ranging from ball speed to spin rate, height to smash factor, face impact to carry and distance.

These data points were all visible across the bottom of the large 12-foot by 12-foot screen, and of course the numbers varied with every shot.

Mark helped me understand what all the numbers meant and which were the most important in evaluating the performance of an iron—launch angle, spin and height.

He called up a screen that showed the flight path of all my shots so far and showed an average for every data point.  Armed with this baseline, he now had me try some other irons.

The first iron I tried was the Callaway X-Forged 7-iron with a slightly lighter KBS Max 90 Regular shaft, also two degrees down and a half-inch long.

I hit a few shots and saw a consistent shot shape and pattern appear on the screen.

“Your face impact is good,” Mark said, referring to an image of the club head on the screen. It featured a red dot on the face where I’d just impacted the ball.

“I can see exactly where you’re striking the ball, and then I can adjust your lie angle or shaft length or have you try another club to improve the point of impact. But right now, with this club, you’re good.”

Next, Mark switched on a function called the TrackMan Optimizer. 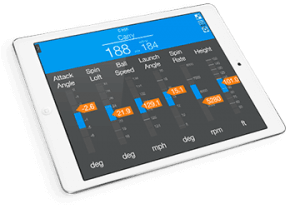 “This helps us make any needed adjustments to optimize your trajectory and your distance,” he explained. “But right now, look at this data, everything looks really good here, too.”

The impact felt soft and pure, and the ball flew perfectly.

I noticed the X-Forged was flying higher than my current Apex 7-iron and going just as far. The higher flight would help my shots land more softly and hold the greens better.

“If you look at your ball speed, that indicates how well you’re striking the ball and how the club is reacting.”

“What about the smash factor?” I said. “I like the sound of that.”

“That reflects the quality of the strike,“ Mark explained. “How well you’re transferring energy to the ball.  It’s more representative of the player than the club.”

I certainly liked how the X-Forged felt.

“You’re hitting this club very consistently,” said Mark. “That shaft is helping you get more height and Callaway has revamped the X-Forged with a different groove pattern that is more forgiving.”

How About Trying A Blade?

Excited by how well the new X-Forged was working for me, I asked Mark if I could try an Apex blade. I’d never hit a blade before and wondered what it felt like.

He handed me a 2018 Apex MB, a true player’s club. A bit nervous to have such an exacting, elite weapon in my hand, I concentrated hard as I struck the ball.

The impact felt soft and pure, and the ball flew perfectly. 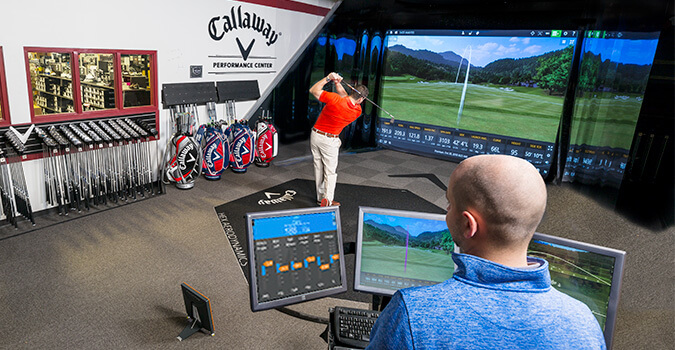 When the numbers came up across the 10 data points, I was surprised to see the blade was eight yards shorter and five feet lower than my average shot with the X-Forged.

I hit another shot with the blade, and again the feel was pure and the shot straight. I felt a little swagger creeping into my bones. Maybe I was ready for a blade. Maybe I was a player.

My third shot ended this fantasy. I mishit the ball slightly, but the result was an exaggerated peel off to the right, by far the worst shot I’d hit during the fitting.

Mark smiled at me. “There’s no forgiveness in a blade.”

“I guess not,” I said, coming back to reality. “What else should I try?”

Two Other Irons: Close But No Cigar

Mark set me up with a Titleist AP3 iron that mirrored the performance of the X-Forged in many respects. But it wasn’t quite as consistent in terms of height, side spin, or distance. It, too, provided great feedback at impact, but the grouping of balls, when I looked at all the shots together on one screen, was not as tight.

Next, I hit several shots with a TaylorMade P790 forged 7-iron, and while my smash factor with this club was the best of all the irons, the results in other categories were oddly inconsistent.

In the end, Mark and I agreed that the X-Forged had delivered the best results.

Call to schedule your CPC fitting in Hudson, NH, today.

Time To Swing A Driver

Now it was time to get fit to a driver.

“I love fitting drivers because if I can help a person get 10 or 15 more yards, that’s a big deal,” said Mark.

At 62, I’m losing ball speed almost as fast as my hair—and if he could get me some extra yardage, I was all in.

As with my iron fitting, Mark first had me hit my own driver several times to establish a baseline performance. I play a Callaway Epic driver with a very light, 40 gram, X5ct regular shaft, 10.5 degrees loft, with a slight draw bias.

Hitting my driver, I was struck by the TrackMan tracer results on the screen in front of me. The ball flew low and didn’t go very far.

Where was the towering trajectory of Rory? The 300-plus yard carry of Jason Day? What about the 21-foot curve of DJ, as he worked the ball around a dogleg?

I was using the same TrackMan technology as the pros, but I sure wasn’t hitting it like them.

Mark tried to ease my mind. “There’s no wind, no slope, no roll in this environment. You’re always going to have something on the golf course to help you get some more distance.”

I appreciated his kindness, but the numbers were alarming. An average carry of 181 yards and an average distance of 205 yards? Seriously?

In midsummer, I could hit my 3-wood 200 yards off the fairway as a second shot into par 5’s. What was wrong with me?

Once again, he used the TrackMan Optimizer to see where I might be losing distance or failing to get optimal trajectory.

When my results weren’t good, he switched me to a different, lighter shaft—an Aldila Quaranta shaft, 45 grams, regular flex.

My launch angle and spin rate both improved—two keys to hitting better drives—and my accuracy was also good.

I gained an average of six more yards, but I really wanted 10 or 15.

“I’m just not hitting it very well,“ I said.

“I usually see a bell curve in here,” said Mark. “There’s always a point at which people’s performance drops off.”

I didn’t want to admit I was tired.  Surely, I could hit better drives!

“Let’s try one other option,” he said, setting me up with the same Callaway Rogue head and a different regular shaft—a bright blue, 45 gram Oban Devotion.

“There’s an upcharge with this shaft, but a lot of people like how smooth it feels and how well it performs.”

I swung the electric blue shaft and hit my three best drives of the day. The ball carried farther and the total distance was better by a full 10 yards.

I wondered how far would I hit it if I were fresh? 15 yards farther? The results were exceptional, especially because I had to admit Mark was right—I‘d fallen to the downside of my performance bell curve.

He saw my eyes light up as I considered the power of the Oban.

“Oban shafts are handmade, so the quality is really exceptional.”

I also learned that Oban shafts are really expensive, so I’ll have to decide if I want six more yards with the Aldila Quaranta shaft (which comes standard with a new Callaway Rogue driver) or hope to add 15 yards with the Oban.

With winter looming, I have time to decide before next spring. But I know the direction I am leaning. Avid, compulsive, obsessed, I will probably wind up with the Oban.

Mark had a final suggestion, based on what he’d seen of my launch and ball flight characteristics with the TrackMan Optimizer.

“I’d also recommend that you increase your driver loft to 11.5. That will help your launch angle and give you a bit more carry and distance.”

“Sounds good,” I said and thanked him.

A Report to Bring Home & Recommendations To Review

Before I left the CPC, Mark handed me a printout of his recommendations for my irons and my driver. These included the club models, along with shaft options, lie angle, loft and grip size.

“If you lose that report, no worries,” he said. “We keep all of your fitting data on file. Just give us a call or send us an email and we’ll get you another copy.”

I have the report in a special file, and as I weigh my options, I can still picture the results on the large floor to ceiling TrackMan 4 screen. It’s the most detailed and informative custom club fitting experience I’ve been through—with more visual feedback and insightful data points than ever.

I’m excited to get my new clubs. The never-ending quest for playing better golf continues!